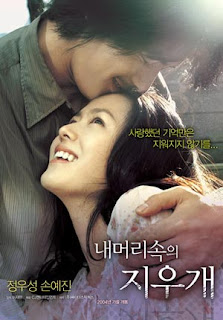 The main cast of this movie are Son Ye Jin (I recognized her as Park Gae In character in Korean Drama, Personal Taste) and Jeong Woo Seong. The movie itself was made in 2004.

At my first second of viewing this film, I think I know the rest of story: it will be an innocent girl who sicks and died, then the man was in deep sorrow! And these predictions are not all right..
However I kept watching it, and felt it became more interesting second by second. At the end, I was crying and my tears were like a river! Though, I am a kind of easy-to-cry-viewer haha!

A Moment to Remember was about a couple who really love each other, Kim Su Jin and Choi Cheol Su. Though they are coming from different status of family, which is Su Jin is a daughter of Cheol Su's boss. In the next step of their relationship, Su Jin wants Cheol Su marry her. Cheol Su said, "No body in this world, will happy 'till the end!" However, they are married eventually.

In the middle of their happiness, something happens to Su Jin. She becomes forgetful every time. Doctor said, she has Alzheimer disease that will erase her memory step by step until she can't do anything. This is the stage where their love was tested. However, Cheol Su decide to love and care after Su Jin till the end.

Though I am able predict the plotin the first second of the movie, I still surprised with the story in it. The movie still be able to flow my emotion gradually, till I reached the climax and made me cry all the way! Also, I could feel that my heart torn, really!

No exaggerating scene. The director could describe every moment and development in details, especially when Su Jin gradually lost her memory. I like the plot, when two different time frame were collated into one scene. it happened in the scene of how the love of Su Jin and Cheol Su grew and when Su Jin cried because of doctor's diagnose.


From the story of this movie, I could say some points of important value of life.

True Love and Sacrifies
Su Jin loves Cheol Su all heart. She loves him though he probably seems doesn't have future, but she believes in him. She support Cheol Su in everything he does.
Cheol Su loves Su Jin with all of his heart. Though he knows, his marriage will not have future with Su Jin, though Su Jin will forget him, and probably Su Jin will be like a burden for him, Cheol Su doesn't give up. He promises to Su Jin that he'll do everything to make Su Jin always remember and always be in her side.

True love also works to them. When Su Jin had forget half of her memory including Cheol Su, Cheol Su took her to the first time they met each other. Cheol Su did what the first time they did and ask the people in their life to come. Suddenly, she remember everything. Cheol Su has made his promise: to be the memory of Su Jin :)

Forgiveness
The most memorable sentence of this movie is: "Forgiveness is not that hard. Forgiveness is just like giving more space in your heart for the person you hate.."
Su Jin's father forgave her for what she had done and gave his trust to Su Jin to choose what she wanted to do. Then Su Jin told Cheol Su what her father did, so Cheol Su will forgive his mother. At the end, Cheol Su forgive his mother and their relationship was conciliated.

Memory
Su Jin said, what is love without memory? How important is our memory. What will it be when we can't remember our lover? When Su Jin only remember Yung Min (her already-married ex boyfriend) and called Cheol Su with Yung Min's name, it really hurt Cheol Su.
However, when she remembered everything: the first time she met Cheol Su, all things that they have done, Su Jin write them all before she forget it all. How sad is it, if we could remember only once then forget it all.
The most painful thing in this world is when the one I love forget who I am...

For the further synopsis, please check this post :)
(If you haven't watched the movie, please do not visit that post :p!)
By Tia at 23:04

I am so glad to share this blog with you. I just share some parts about my life, that probably could be an inspiration to other. However, I would write everything in my thought. If it may harmed or offended anybody, please accept my apologize.

Happy Reading and
God Bless you!

Tia
Tia. I call my name like that. My full name is Tia Hariani. Just call me Tia. Ordinary girl that believes that she is made uniquely by the Creator of Life. Since I only can be concentrate at evening, psychology theory said that I am good in art. Really? Let's see... But no matter what my talent is, I love my life..I feel blessed with my life.. and I never feel regret about this life..My life is a mercy from God. Myself is imperfect, not all things good happen.. lots bad stuff stopping by within my days.. but I believe this is the best of me. God never creates a junk... Well..no word could describe me best, unless "UNIQUE"... God Bless You...